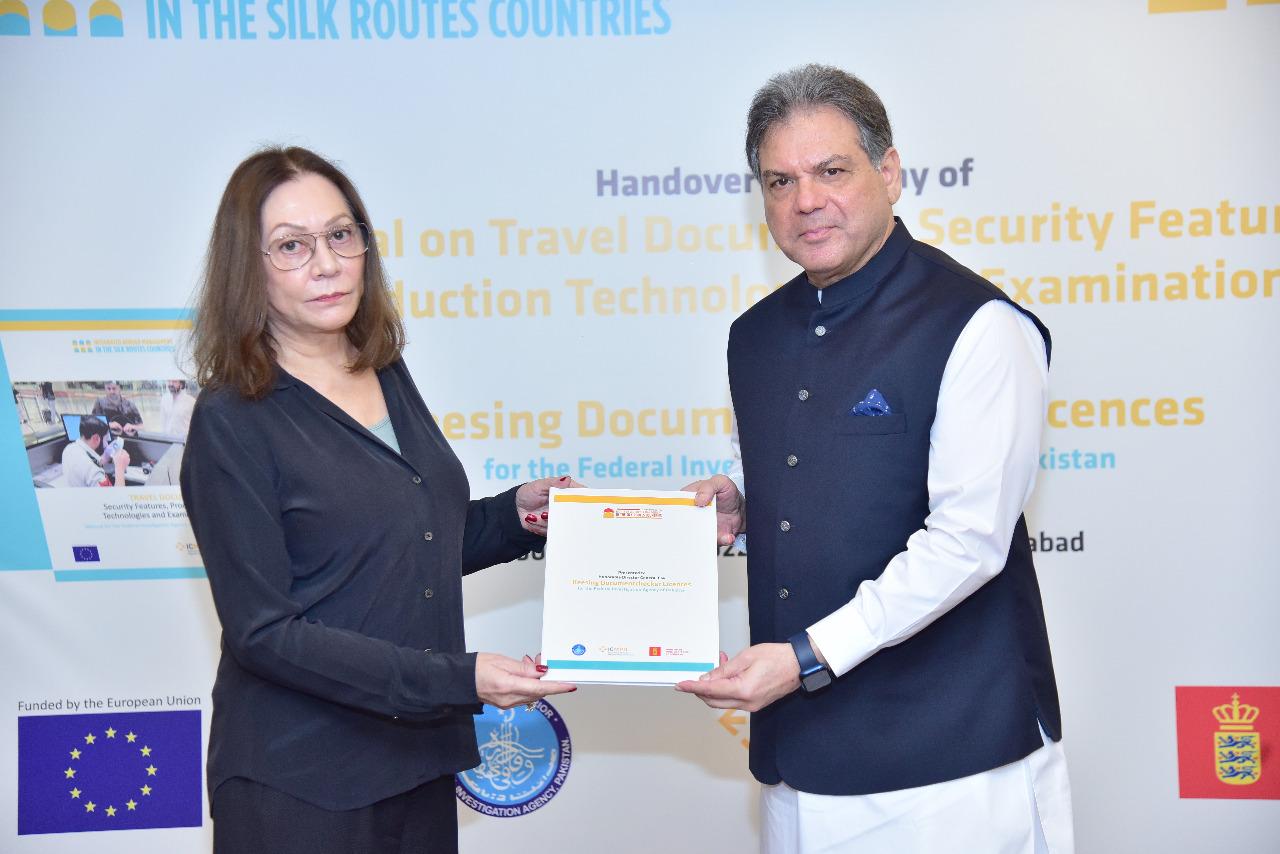 Islamabad, 30 September: The Federal Investigation Agency (FIA), and the International Centre for Migration Policy Development (ICMPD) jointly organised a handover for a Manual on ‘Travel Documents, Security Features, Production Technologies and Examination’ and six document security database licenses. The handover took place as part of the closing ceremony of a 5-day training on document security and profiling delivered by ICMPD, marking the end of a five-month induction training programme for a newly recruited batch of thirty-three Assistant Directors in the FIA.

The Manual was specifically developed for the FIA’s Immigration Wing based on their operational needs and priorities as well as international best practice. During the ceremony that gathered together senior representatives from the FIA including Mr. Mohsin Hassan Butt, Director General FIA, H.E. Jakob Linulf, Ambassador-Designate of Denmark to Pakistan, the European Union, and ICMPD, 100 copies of the Manual were handed over to Director General Butt by ICMPD Head of Office Pakistan, Ms. Raana Rahim. The copies of the training manual will be further distributed to all border crossing points (BCPs) in Pakistan as well as the FIA’s Training Academy, where it will be used for training purposes. The handover ceremony was also attended by Mr. Eric Hahn, European Migration Liaison Officer from the European Union Delegation to Pakistan and Mr. Zubair Ashraf Siddiqui, Additional Director General Immigration, Mr. Jan Muhammad, Additional Director General, Hqrs, Dr. Athar Waheed, Director Training FIA Academy, Mr. Javed Akbar Riaz, Director Anti-Human Smuggling FIA, and Mr. Alam Shinwari, Director IBMS.

Additionally, during the handover ceremony, six Keesing DocumentChecker Module ID Licenses were provided to the FIA, which will grant the Agency access to the world’s most comprehensive reference database for Identification documents  used to verify the authenticity of passports, ID cards, residence permits, visas and driving licenses against the most up-to-date information. The DocumentChecker database contains reference material on thousands of specimens and genuine documents from over 200 countries and organisations from around the world. The Keesing DocumentChecker licenses will be deployed at Pakistan’s busiest international airports and will be used by FIA officers responsible for checking the authenticity of travel documents.

Mr. Hassan Butt, Director General FIA, opened the event and noted “The staff of the FIA’s Immigration Wing are the front line in upholding the FIA’s responsibility at border crossing points to inspect and certify the entry and exit of passengers based on legitimate travel documents confirming their identity. The use of false and fraudulent travel documents and identities is an enabler of a wide variety of organised criminal activities, including irregular migration, trafficking in human beings, the smuggling of narcotics and contraband goods and terrorism. This manual and database are the latest step taken with our international partners the EU, Denmark and ICMPD to enhance the FIA’s role in securing our national borders.”

Mr. Jakob Linulf, Danish Ambassador Designate said on the occasion, “The integration of a right-based approach throughout migration and border management governance is of great importance to Pakistan, Afghanistan and their neighbouring countries with the aim to safeguard the rights of vulnerable migrants and at the same time to facilitate cross-border economic activity and trade. I am proud that our shared project of “Rights Based Border Management in the Silk Route Countries” is crucial in addressing these challenges and solutions, especially when it comes to border and migration management, and congratulate the thirty-three newly recruited Assistant Directors on successfully completing five months training and are now ready for operational positions”

Development and provision of the tailor-made Manual on Travel Documents for the FIA is part of ICMPD’s ongoing support in enhancing the border management capacity of the FIA, in particular the development of advanced document examination and border check capabilities. It is also intended that extending access to Keesing DocumentChecker database for FIA officers stationed at Border Crossing Points (BCPs) will enhance their capacity to identify false and fraudulent documents and support the FIA in their efforts to counter irregular migration at national borders.

The IBM-Silk Routes project is funded by the European Union and is implemented by ICMPD. The project aims to support the countries of the Silk Routes region, including Pakistan, to build more effective and efficient border management systems, and in doing so strengthen the capacity of state authorities to combat irregular migration, encourage safe migration, and enhance trade and prosperity across borders.

The RBM-Silk Routes project, funded by Danish Ministry of Foreign Affairs and implemented by ICMPD, is aimed at strengthening the capacities of Pakistani agencies and authorities responsible for borders and migration management, reinforcing their role as duty bearers to uphold the rights of migrants transiting national borders. In particular, in Pakistan the project seeks to support Federal Investigation Agency of Pakistan to increase its institutional and operational capacity in combatting irregular migration, and enhancing border and migration management.

Migrant Resource Centres in the #SilkRoutesregion once again highlighted the importance of the available one-stop information hub and referral centres...

The Budapest Process Secretariat is proud to announce that the Norwegian Ministry of Justice and Public Security will support the...