Home › About the Dialogue 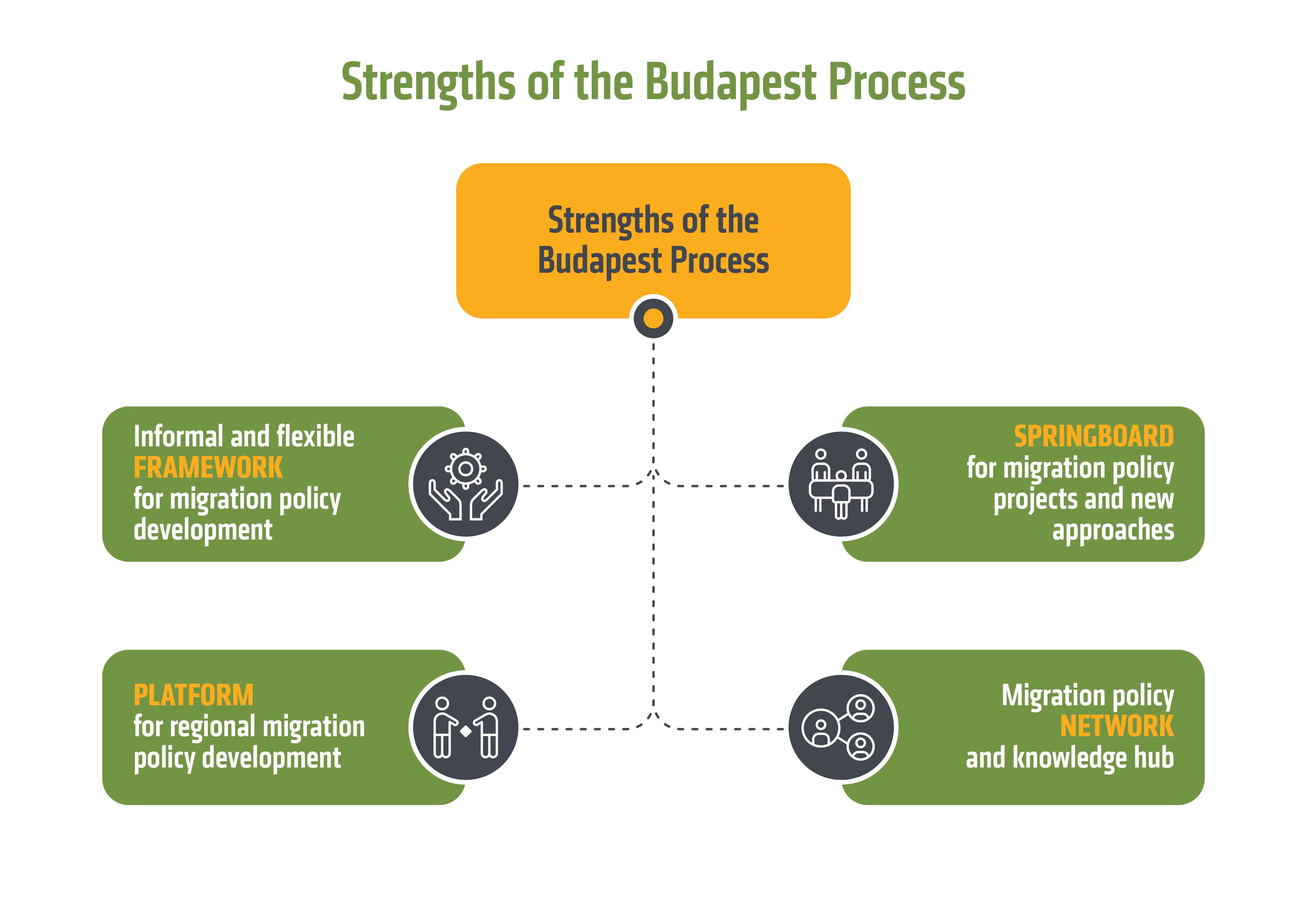 The Budapest Process in a nutshell

The Budapest Process is an interregional dialogue on migration stretching from Europe to the Silk Routes Region – also covering Europe’s Eastern neighbours, the Western Balkans and Central Asia. The dialogue provides a platform for dialogue and operational cooperation for over 50 governments and 10 international organisations and aims to strengthen regional dialogue and cooperation on migration and mobility. Furthermore, the dialogue partners are committed to promoting safe, orderly and regular migration along the migration routes, as highlighted in the most recent joint political declaration.

During its more than 25 years of operation, the Budapest Process has built up a far-reaching network among participating states and wide thematic coverage. The dialogue is known and valued in the regions it involves. The Budapest Process also offers a platform for learning and training between peers as well as for facilitating concrete project development and cooperation.
The participating states meet annually or bi-annually for Senior Officials’ Meetings to discuss developments in the region, to determine the main policy directions and to support the Process. States are also invited to participate in Regional Working Groups which gather expert officials from national administrations to examine, discuss and share information and best practices on matters dealing with concrete migration challenges.

The History: from a European cooperation framework to A Silk Routes Partnership for Migration

Over the last 25 years, the Budapest Process has become recognised by participating states both in East and West as well as further stakeholders, as an excellent tool for identifying and addressing evolving migration challenges. Key dates mentioned below give an insight into its growth and flexibility in adapting to the shifting migration picture:
Ministerial conferences are milestones in the development of the Budapest Process. Each declaration has given room to a widened geographical and thematic scope. The year 2013 was pivotal for the Budapest Process. It marked the 20 years’ anniversary of the dialogue . Furthermore, the Ministerial Conference in April led to the adoption of the “Istanbul Ministerial Declaration on a Silk Routes Partnership for Migration” which consolidates the geographical refocus of the Budapest Process under the Turkish Chairmanship to the Silk Routes Region and helped evolve the dialogue towards a partnership among countries of origin, transit and destination.

In February 2019, Ministers gathered in Istanbul to adopt the “Istanbul Commitments on the Silk Routes Partnership for Migration and its Call for Action – a five year plan”. This political declaration and action plan build upon the achievements of the 2013 Istanbul Ministerial Declaration on a Silk Routes Partnership for Migration while taking into account the migration developments of the past years. It introduces five commitments to be upheld in migration management – to partnership, to comprehensive migration management, to human rights, to support and solidarity and to knowledge. The Budapest Process will now focus on the implementation of the five-year action plan.

Operationalisation of the dialogue

The Budapest Process has come to master the balance and interplay between political dialogue and operational action, with concrete projects flanking the dialogue and creating tangible outcomes of the political objectives established. This interplay between political dialogue and concrete activities, where both components are equally necessary, has been used continuously and has also been visible to the donor community – including both bilateral donors and the European Commission, which have supported project and dialogue activities.

The projects in the Silk Routes Region serve to improve the capacities of administrations to better manage all aspects related to the movement of people, including awareness of how migration could be more beneficial for the development of each country. The success of the operational activities in projects depends on trust and political commitments. This makes the political dialogue indispensable. The political dialogue ensures that actions are anchored and facilitates trust building and common understanding between officials from different countries. The results of dialogue manifests in wide-ranging networks, the development of a common language on migration issues and trust to efficiently cooperate on these matters.

The History: from a European cooperation framework to A Silk Routes Partnership for Migration