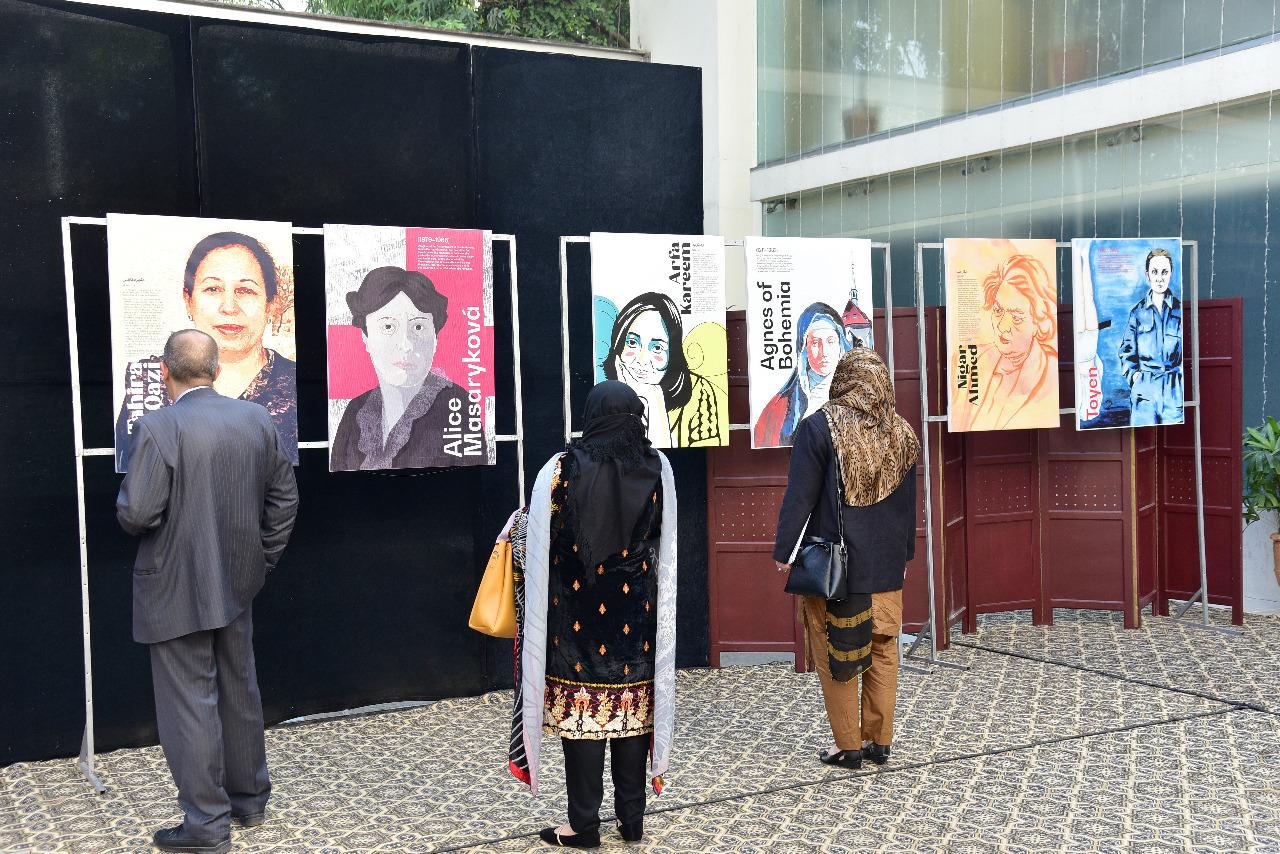 An art exhibition highlighting the role of female leaders and role models was organised to raise awareness of gender equality in Pakistan’s border management agencies. The exhibition, which was jointly organised by the Embassy of the Czech Republic in Pakistan and the International Centre for Migration Policy Development (ICMPD), and funded by the European Union, gathered over 50 representatives from national border authorities, civil society and the international community.

The exhibition, titled “Czech and Pakistani Heroines” was jointly developed by the Czech Embassy and National College of Arts, and features artists from the University of West Bohemia and the NCA. Each artwork focuses on a female role model from the Czech Republic or Pakistan and the role they have played in their societies.

Czech Ambassador Tomáš Smetánka opened the exhibition, acknowledged Pakistan’s border management agencies together with ICMPD for their focus on issues related to gender in their recent cooperation. He noted that by displaying the collection of women’s portraits, the Embassy wishes to complement the topic of workshops held by ICMPD and pay tribute to some of the audacious, generous, independent, inspiring and untiring women from our past and present.

Mr. Jan Muhammad, FIA Additional Director General for Headquarters, thanked the FIA’s international partners for highlighting the action that the FIA and other border management agencies are taking to improve gender mainstreaming. He noted that the FIA is already pursuing a number of recommended activities in this area, but that the FIA recognise it is a long-term process and they continue to focus on increasing awareness of gender issues throughout all levels of the organisation.

Ms. Sedef Dearing, ICMPD’s Head of the Silk Routes Region, highlighted the positive role gender mainstreaming can play in border management and the progress already achieved by Pakistan’s border agencies. She noted that gender equality is a global, whole-of-society mission, and that international cooperation through initiatives such as the exhibition are integral for achieving this.

The importance of gender mainstreaming is increasingly recognised in both the internal and external activities of border agencies such as the Federal Investigation Agency, Anti-Narcotics Force and Pakistan Customs. Examples of gender mainstreaming in this context include considering the needs of both male and female travellers and officials at border crossings in terms of infrastructure and facilities, and having specially trained officers to deal with gender based violence and trafficking in human beings within migration flows. Internally, it means ensuring equal representation and treatment of male and female officers within border services in terms of career opportunities, well-being, and safety, among many other areas.

Positive trends, including the recruitment and career growth of female officers within border management agencies in recent years illustrate that the benefits of gender equality are gradually being recognised.

However, further steps are possible, such as improving the understanding as to how more female staff can improve the functioning of national border management agencies, as well as how they can make them more representative of the societies they serve, thus raising public trust in the institutions.

The exhibition marked the conclusion of an initial series of workshops and consultations with border authorities that ICMPD organised in 2022, supported by the European Union, and the Czech Embassy. Efforts will continue in 2023 with the aim to assist Pakistani border management agencies in implementation of a set of recommendations to further strengthen gender mainstreaming in their internal policies, guidelines and practices.

The exhibition was jointly organised by the International Centre for Migration Policy Development (ICMPD) and the Czech Embassy in Pakistan, and funded by the European Union, as part of an ongoing programme of technical assistance to Pakistan’s border management agencies.

The Czech and Pakistani Heroines exhibition arose from a collection of portraits produced by students of the Faculty of Design and Art of the University of West Bohemia, complemented with a similar set by the National College of Arts of Pakistan, with the support and encouragement of the Czech Embassy in Islamabad.

The “Integrated Border Management in the Silk Routes Countries” project is funded by the European Union and implemented by the International Centre for Migration Policy Development (ICMPD). The project aims to support the countries of the Silk Routes region, including Pakistan, to build more effective and efficient border management systems, and in doing so strengthen the capacity of state authorities to combat irregular migration, encourage safe migration, and enhance trade and prosperity across borders.

Migrant Resource Centres in the #SilkRoutesregion once again highlighted the importance of the available one-stop information hub and referral centres...

The Budapest Process Secretariat is proud to announce that the Norwegian Ministry of Justice and Public Security will support the...